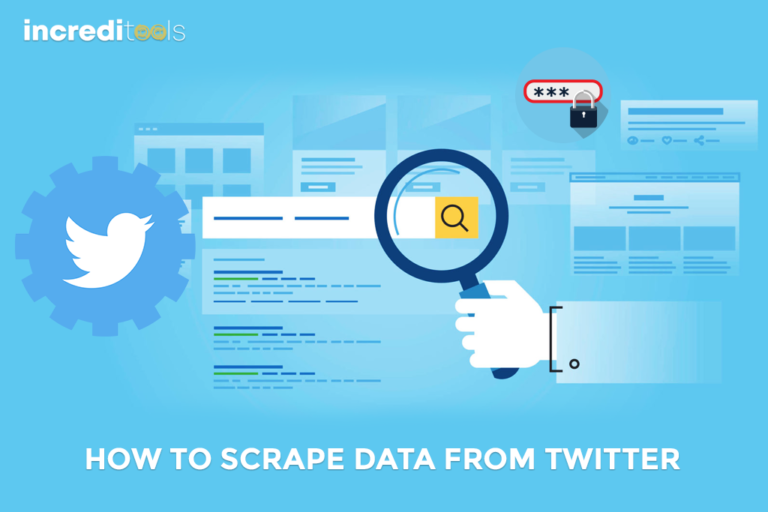 If you want to carry out social research and extract data from social media platforms like Twitter, you may need a scraper, depending on the time frame and size of the data required.

Social media scraping is one of the best things to happen to researchers looking to gather information about a particular social media platform.

With this, you can extract the required data for your analysis while saving your time, effort, and money because bots automate the process. Twitter scraping is easy, as there are numerous Twitter scrapers in the market to pick from.

This article talks about the best Twitter Scrapers in the market for you to choose from if you are a business or social researcher looking to get data from Twitter.

Twitter is one of the world’s most famous social media platforms with millions of users. This platform gets to exchange millions of tweets daily in the form of text, videos, and images.

It handles a great deal of traffic online from users all over the world.

In the world of scraping, when big data is mentioned, not all websites or platforms can relate to it, but social media platforms like Twitter can. Statistics show that Twitter exchanges more than 500 million tweets daily.

The exchange of information is essential for most social researchers, especially tweets made of text, as they could be used for text classification, sentimental analysis, and other kinds of predictive analysis.

They also have a keen interest in Twitter users’ profiles,  followership, and several other details. The good thing is that Twitter has a friendly, extensive, and free Public API, unlike most other social media platforms.

It even makes Stream API available for accessing live Twitter data, and with this, social researchers can easily access the data on its platform.

For many social researchers and businesses, the API Twitter provides is all they need to extract the data of interest.

Sadly, there are limitations on these APIs in terms of how far users can go to collect historical data and the number of requests they can send within a single-window period.

These limitations affect the analysis of these researchers because the information needed is mostly not complete or not accessible in the manner required. Therefore, it makes these APIs useless to researchers.

If the data extracted by the APIs provided by Twitter is not sufficient for you as a researcher, using Twitter scrapers is the best way to go about it.

This involves using web bots to automate the data extraction process from Twitter. Based on this, Twitter Scrapers are simply Web bots that support efficient scraping on Twitter.

Often, many who are new to scraping mistake using Twitter APIs for extracting data as Twitter data scraping; however, the two are different.

These two methods of data extraction from Twitter differ in the way they extract data. Using Twitter APIs to extract data is an officially acceptable way to collect data from Twitter.

Also, you collect only the required data. However, Twitter scraping involves using Web bots to retrieve the whole HTML of a Twitter page and parsing out the data you need.

Twitter Scraping is not supported by the Twitter platform, and scrapers are at risk of a lawsuit from their legal team if caught.

Although scraping data available to the public without permission from the website is considered legal in the court of law and is the general consensus. Scraping can also be illegal, depending on the intention of collecting the data.

Twitter clearly frowns at Twitter scraping but has fragile anti-scraping systems to prevent data scraping on their platform.

You don’t need to have coding skills; however, to effectively engage in Twitter scraping, you still need to bypass whatever resistance you meet in the form of Captchas and IP address blocks.

With a visual scraping tool for Twitter Scraping, you are sure to have sufficient data for all you need.

If you are a coder or you have good programming skills, you can create your Twitter scraper. You can include features you wish to use and have them integrated into a more extensive system.

This helps you save time and resources. Twitter scrapers are easy to build and don’t require any specific programming language for building one.

However, one of the best programming languages you can use to create your Twitter Scrapers is Python. It has some great libraries for building Twitter Scrapers to simplify the development and save you valuable time.

When Scraping data from Twitter, what is required is to inspect the HTML code of the profile page that has the content you want to scrape and parse.

You also have to check the tags the data is enclosed in and find out how to collect additional content once the first page is rendered. Once this is complete, you can send requests to Twitter’s website to download the web pages of your choice and parse out the requests with Beautifulsoup.

Before doing this, ensure you configure proxies and also set the User-Agent header of the bot you are using to be that of a popular browser.

If you are a researcher that can’t build your scraper yourself but wants to scrape data from Twitter with the aid of quality Twitter scrapers, you will do a fantastic job.

It is fast, secure, reliable, and very easy to use. By using hashtags, keywords, or even URLs, you can effectively perform Twitter data scraping.

The required information will be automatically provided and available for download. A major selling point of the Bright Data Twitter ScraperData Collector is that all data scraping is done for you automatically.

You can also request a custom collector if they don’t have the right collector for the data you want to scrape. Bright Data Twitter ScraperData Collector supports all web-based platforms and gives out its information in excel format.

It is pretty expensive, as the lowest plan starts from $500 for 151K page loads. The good thing is you have access to free trials before paying for their services.

The Apify Twitter Profile Scraper is another top-rated Twitter scraper in the market. This Twitter Scraper is designed for scraping data from specific accounts and provides highly specialized work.

It can scrape information from Twitter such as user tweets, retweets, profile details, conversations, and favorites on Twitter. The Apify Hashtag Scraper is specialized for scraping tweets with specific hashtags, effectively carrying this out.

The usage of the actors on Apify Twitter Profile Scraper is subject to users’ subscriptions. Therefore, using more than one actor doesn’t affect the amount you pay for it.

The format supported for their data output is only JSON. Apify supported OS are cloud-based OS that can be accessed through API.

Octoparse is an excellent Twitter scraper and has proven to be among the data scrapers in the market. It can scrape all publicly available data on Twitter; however, it is not a specialized Twitter scraper because of its already-made templates.

Octoparse is a scraping bot that is secure and efficient for scraping, and it works undetectably, making it difficult to be blocked. Octoparse is one of the fastest data scrapers in the market, providing the scraped data in various formats.

Some of the formats supported for the data scraped include JSON, EXCEL, CSV, MySQL, and SQLServer. Octoparse is highly compatible, as it supports both cloud-based platforms and desktop applications.

It also supports scraping task scheduling, with a point and click interface that is easy to use. Its pricing starts at $75 per month; however, you have access to 14 days of a free trial, although it comes with some limitations.

ScrapeStorm is a flexible yet rugged web scraper for scraping Twitter profiles, tweets, and other content on Twitter available to the public. It is highly rated by researchers as one of the best web scrapers in the market.

ScrapeStorm is pretty effective and efficient for scraping and can scrape unnoticed without getting blocked with the proper settings. It is also designed to handle big data and will still perform well irrespective of the amount of data you are scraping.

ScrapeStorm is supported on desktop platforms and provides its data in numerous formats, including JSON, MySQL, TXT, CSV, Excel, and Google Sheets.

It is cheap, with its monthly plans starting from $49.99 per month. Users also enjoy free trials before subscribing to their services, although their free trials come with certain limitations.

Webscraper.io Chrome browser extension is a premium web scraper for scraping Twitter. It is arguably the most famous web scraping extension available today and is designed for the modern web.

Researchers, marketers, and others who engage in data scraping can scrape tweets, comments, user profile information, and other data publicly available on Twitter with Webscraper.io.

It is easy to use, and the data scraped can be downloaded seamlessly. The best part of using the Webscraper.io Chrome browser extension is that it is a free scraping tool.

Helium Scraper is a top data scraper known for its ease when it comes to scraping, as it proves that scraping websites shouldn’t be difficult.

It is famous for its intuitive point-and-click interface, which makes its usage easy. With its point and clicks interface, you can train the Helium Scraper on the data needed to be scrapped.

Helium Scraper is one of the best data scrapers for Twitter, and it supports scraping for publicly available data on Twitter websites. You can use it for scraping tweets, Twitter profiles, profile information on Twitter accounts, comments, replies, and other associated details.

Helium Scraper is loved for its incredible speed, which helps you save time when scraping. Some of its most significant selling points are that it can be used to schedule scraping tasks, handle big data, and detect similar elements of web scraping tasks.

Helium Scraper sells for $99 for one user license and offers fully functional ten days of free trials. It is supported on desktop platforms and gives data in several formats, including CSV, XML, Excel, JSON, and SQLite.

If you are a coder, several tools are available to help you build your scraping tool yourself.

However, if you don’t want to go through the stress of building one, or you don’t have the skills of programming, there are numerous data scrapers in the market to source data for your research.

Many of these scrapers are compatible with Twitter and other social media scraping and will give you the desired result. If you are new to web scraping and don’t know the suitable scraper to choose from, any Twitter scrapers discussed above will do a great job.