How Many People Use The Metaverse in 2023? (Monthly Active Users)

In this article, we will address, to the best of our ability, not only how many people use the metaverse, but what it is and, its intent for the future. 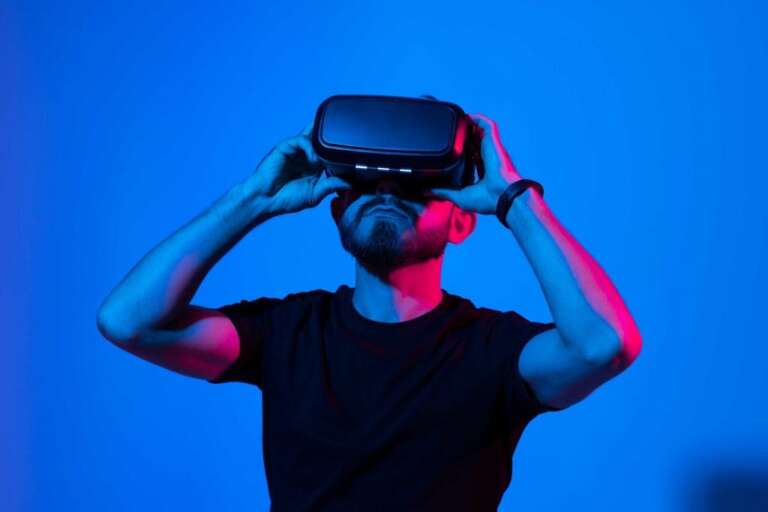 How many people use the Metaverse in 2023 is the topic of discussion for this article.

Many people think that the Metaverse is Facebook, but it goes well beyond that social media platform.

More than 160 companies are involved in the Metaverse. Therefore, it’s difficult to pinpoint with accuracy how many people use the metaverse.

Some of the technology that has been created and is in creation includes virtual reality (VR), augmented reality (AR), and smart glasses.

Something tells us that this is just the beginning if this keeps evolving.

Today, we will address not only numbers of Metaverse active users, but what it is and, its intent for the future.

How Many People Use the Metaverse?

How many people use the Metaverse in 2023?

The latest reports tell us that 400 million people use the Metaverse every month in 2022.

The 2023 forecast is that there will be 110 million Americans will be using augmented reality.

What Is the Metaverse?

Since the Metaverse is such an immersive and complex set of elements, it’s hard to pin down exactly what it is, but we’re going to attempt to do so here.

In the simplest of terms, the metaverse can be described as a simulated environment that uses several forms of technology, including blockchain, augmented reality, virtual reality, and concepts from social media to create “spaces” where users can enjoy a rich, immersive experience that imitates the real world.

If you want to use Facebook’s definition used in its press release, this is what this platform says.

“The metaverse is a set of virtual spaces where you can create and explore with other people who aren’t in the same physical space as you. You’ll be able to hang out with friends, work, play, learn, shop, create, and more.”

You’re already seeing this concept on Instagram, where the platform opens up shopping options one can do right from the IG app.

In fact, you’re seeing the metaverse through virtual meetings, gaming, training, education, and in real estate, and that’s just the beginning.

How Many Companies Are Involved with The Metaverse?

As mentioned, Facebook isn’t “the metaverse”. Instead, the metaverse is a huge collaboration of several companies making use of the technology.

Any company, including Facebook, engaging in AR and VR technology is the metaverse in action. This technology is so large that it’s in almost everything we do online these days.

It’s also avatars, like the ones you create on Facebook, gaming platforms, and other online digital realms.

The top 10 companies that are involved with building the metaverse include:

Naturally, Facebook is also involved, but not in the top 10 companies.

Where Did the Metaverse Start?

Believe it or not, it all started in the 1990s when a grocery store in the U.K. during the introduction of VR technology where Sainsbury’s created a VR shopping demo, oddly similar to the one Walmart made in 2017.

In the 1990s, VR technology was shown in movies and television shows. Not all of this media was Science Fiction.

Some of it was sitcoms, crime shows, and other shows and movies.

Since the 90s, concepts that are now being embraced by the metaverse are coming to life.

Today, it’s growing in popularity to the point of having its own set of “buzzwords” like these:

It’s likely that you have heard at least a couple of these buzzwords.

What Is the Future of The Metaverse?

Where will the metaverse go from here? There is a lot of speculation from people on every side of this concept whether they agree or disagree about its usefulness.

We are going with the data and figures in this article.

The metaverse is still a work in progress as the top 10 companies mentioned above, along with Facebook and others, develop this technology. How far have they gotten so far?

Related >  How Many Software Engineers in The US in 2023?

The gaming market is where the initial metaverse experiences were used.

Gamers are creating their own worlds and games within the metaverse where they can interact as if they are in the real world.

The gaming market was the ideal realm for the metaverse to enhance game engagement, monetization, and virality.

They have created full-blown concerts for fans to attend where they get to engage with singers, bands, and musicians like Travis Scott, Marshmello, and Ariana Grande.

The concerts are animated, filmed with content where fans can navigate around in the game arena, approach the artist, and have time-shifted encounters.

They can also buy digital merchandise just like you can at a live concert.

A different route is being taken by Meta and Microsoft through virtual rooms called Horizon Workrooms, which you may have heard of, or not.

The use of an Oculus headset is used in a VR environment. A VR conference can accommodate up to 16 attendees, all of whom have their own avatar.

Microsoft’s goal is to transform the workforce and the business realm through this mixed reality solution.

They are trying to bring the digital world and the real world together.

That said, there will be laws that regulate and govern the metaverse to allow it to merge into our lives that are still in the making.

At the moment, however, just like the metaverse doesn’t have a single owner, inventor, or operator.

It remains to be seen whether this becomes an open source system that is based on specific community standards.

At this time, the future of the Metaverse is loaded with uncertainties, but it does have virtually limitless applications that could let developers create whole worlds.

So, how many people use the Metaverse? Right now it’s millions, but how long until it’s billions?